Last year's Founders' Cup Champion (in a 4-hole playoff), Jayson Claar, took a 4-stroke lead into the 2nd and final day of the 2021 Founder's Cup and held on to win the event with a 67/74, net 141 total.  He bested Frank Sherfy by 2 strokes as Frank carded a 72/71, 143 as the only golfer in the field to shoot his handicap on both days.  Jayson won $70 last year and took home $110 for the top prize this year.
Today's KP's each earned a $10 gift card: #2 Frank Sherfy, #5 Bruce Crawford, #12 Terry Walton and #14 Dave Hansel.
Quick reminder:  Remember to post your own scores from the proper tees and with the "Competition" designation.
Quick 2nd reminder: If you want to join us next week for a 2-man computer-pick game called 20 Balls, the deadline for signup is Friday at noon.
The Woods flight was won by Bill Oprish with a 2-day net total of 151 followed closely by Doug Redfield with a 152 and Rod Linville and Jim Mulhall with matching 153's.
Brian Grover was in 4th place to start the day in the DeChambeau flight and shot a blazing 72 to win the flight by 4 strokes with his 146.  Three golfers in the flight shot 150: Kevin McCarthy, Guy Shelton and Larry Tipton while Eric Taylor was close behind with a 152.
The Johnson flight was led by Rob Ortega who recorded a 153 followed closely by a 155 (Lou Mastro), Steve Schneck with a 156, Ron Nunn with a 158 and Phil Bartko with a 159.  Lou started the day in 5th place and shot the best score in his flight today to scramble to a 2nd place finish.
The Rahm flight was dominated by the 2nd lowest score in the tournament - a 143 carded by Frank Sherfy.  Richard Osterlund's 149 took 2nd place honors while Bruce Crawford and Dave Hansel each shot 150.  Matching 153's were carded by Bill Lockett and Paul Knott.
Jack Hunter began the day in 3rd place in the Koepka flight and roared back today to win the flight by 1 stroke over 3 competitors.  Jack shot a 153 while 154's were scored by Jeff Hansen, Ken Hull and Greg Byrne.
The Spieth flight contained the Founder's Cup Champion, Jayson Claar with his spectacular 141 and Bill Albu was 6 strokes back with a 147.  Bill Hawk scored 151 and John Williams shot 152 to round out the money winners.
Speaking about money, remember that all Pro Shop credit earned through the month of November must be spent by December 31 or it disappears.
Please find today's results attached.
Cheers,
Mick Borm 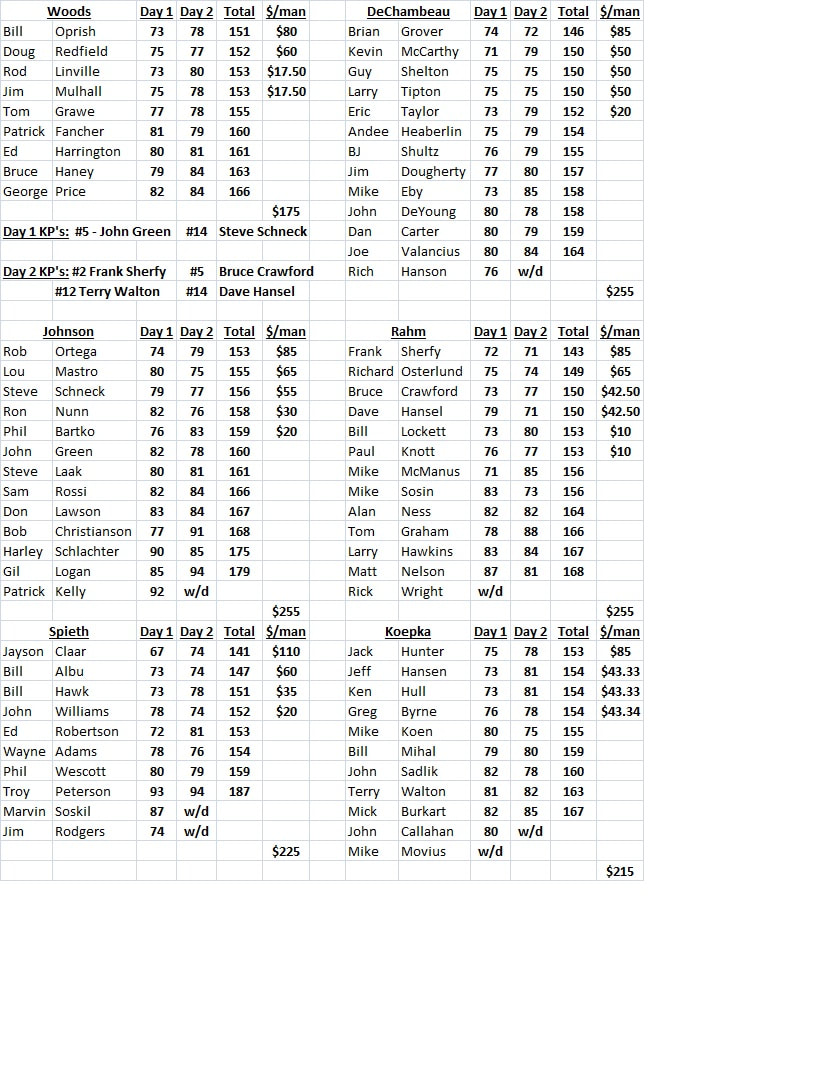