In the 10 matches today of the lowest handicapped players, the Red squad dominated with 8 wins, 1 tie and 1 loss.  Fortunately for the Blue team, the higher handicaps kept them in the hunt as they they managed 8 wins, 2 ties and 3 losses.
The 2-day total now reflects a slim Red advantage, 25-21.  With singles matches yet to play next Thursday, there are still 46 points up for grabs.
As for individual accomplishments, there are 12 Red golfers and 7 Blue golfers that have won both of their matches thus far.

So how many singles matches next week feature 2 undefeated players?  Just one - Joe Valancius vs. Dennis Johnson.  We'll have them both miked up for the match.

Day 3 Results:  The Blue Team turns things around
​The Ryder Cup was hotly contested this year with the Red team taking narrow victories on Days 1 and 2.  They held a 25-21 lead heading into the final day of singles matches.

The Blue squad came roaring back on Day 3 with a few Blue players that were 0-2 on the first 2 days matched against some undefeated Red players.  The Blue team was not to be denied as they won 24 matches today.  The Reds won 17 matches and there were 5 ties.  Lots of exciting matches and when the dust settled after Day 3, it was the Blue team that emerged victorious, 47 1/2 to 44 1/2.

There were 5 undefeated players on the Red team: Dennis Johnson, Randy Friedman, Don Carr, Jim Dougherty and Frank Sherfy.
There were 2 undefeated players on the Blue team: Jayson Claar and Bud Bonvouloir.
Congratulations to these 7 golfers for playing well all 3 days!
​
Each player wins $10 for each match they won and $5 for ties.  The Blue golfers each win an extra $20 for being on the winning team. 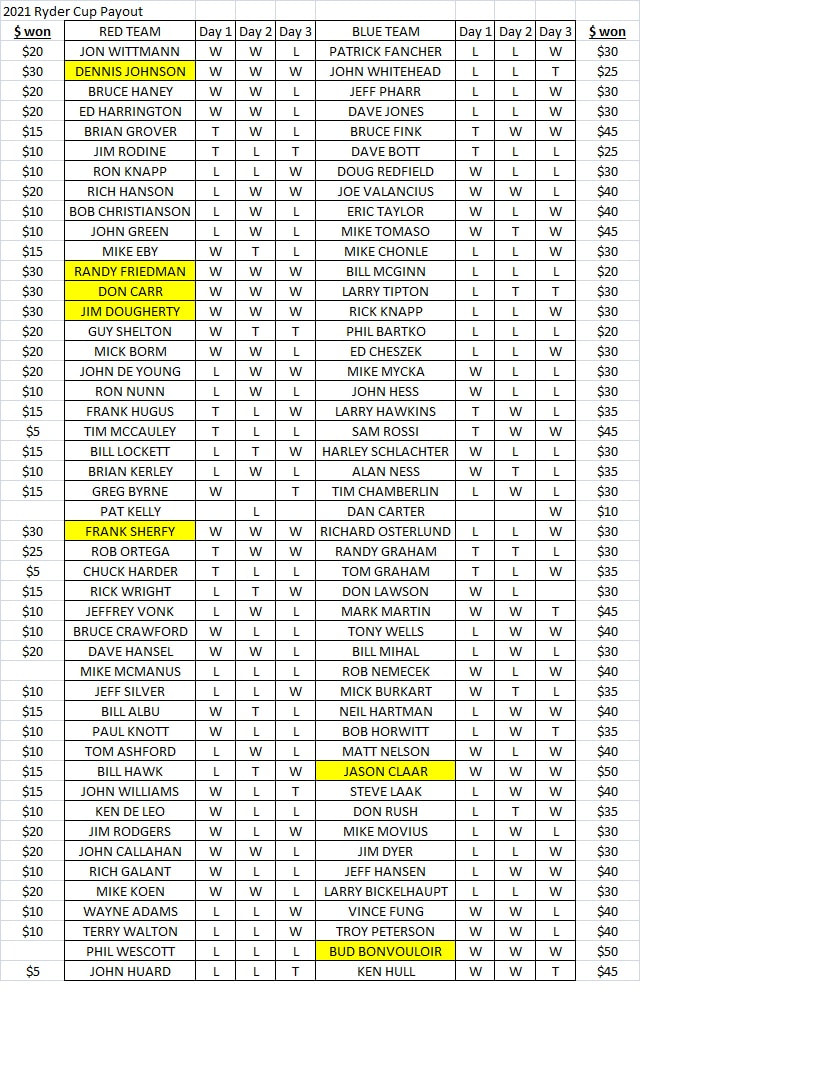